Some people are lucky in never being troubled by the "big questions". They are happy with the world they grew up in. Their needs are adequately met; they are comfortable; it never occurs to them to ask, "Is this all there is?" If you are one of those lucky people, you should probably read no further than "Who I am" (the short version). From that point on things may begin to get a little strange for those of you who are unfamiliar with discontent. To those of you who have been less lucky, welcome home. 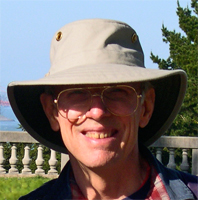 "Who I am"(the short version):

I'm a 60-something multi-divorced, legally married but separated guy. I have a degree and a year of graduate work in sociology which I've never used professionally. I was an Air Force ICBM launch officer in Montana for four years (it kept me out of Vietnam), after which I spent five years in Eugene, Oregon, being a hippy and using my g.i. bill to take English Lit and auto-mechanics courses. I also started working for the Southern Pacific Railroad there as a switchman--a temporary job that went on for 31-and-a-half years with several changes in craft and location. When I retired in January of 2004 I was a locomotive engineer out of Oakland, working for the Union Pacific.

Through it all I've done art--drawing, painting, writing, sculpture, photography--but there was always some dissatisfaction with the medium or with what I could do with it. The computer seems finally to be IT, uniting all my previous interests in one way or another! I'm thrilled. 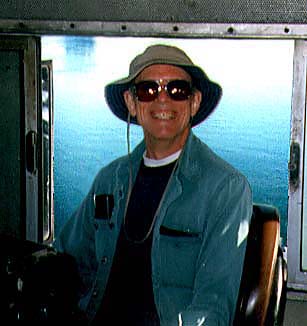 Himself at the throttle crossing the Suisun Bay Bridge in the old days. (Photo: Steve Newman)

For most of my life I was not the happy, carefree guy you see in the picture above. I was not one of those fortunate, untroubled ones.

I have an early memory of seeing a puppy chasing its tail and thinking that that was how most people spent their lives: pursuing something they couldn't catch without ever slowing down enough to realize they were running in circles and going nowhere. I had an image of myself waking up at some advanced age and thinking, "I have pointlessly wasted my life." I didn't want that to happen, and yet I wasn't sure how to avoid it except to continually ask myself, "Why am I here, doing this? What are the alternatives?" Such questions are not conducive to peace, contentment, and stability.

I'm not sure exactly when or where the puppy memory was formed, but there is another pivotal memory I can clearly locate: I was sitting on the back steps of our house in the little community of Homeland one afternoon when I was in the second grade, and I was thinking that despite external appearances I wasn't a real human being. I thought that inside I must be mechanical--a cleverly designed robot--perhaps from another planet. I have no idea what events may have brought on such musings, but they are representative of an ongoing feeling of alienation--for most of my life I felt like I didn't fit in. Such feelings are not conducive to happiness.

Despite my early anguish and discontent, I am today one of the happiest guys on the planet. I would like to pass that on if I could, and the question that comes up is, how? It is hard to describe the place at which I've arrived, and the best approach may be to simply tell how I got here.


I grew up in Fort Meade, Florida, a small town in the center of the state in the middle of orange groves and phosphate mines. I was the second of four children, the first boy. Dad kept the machinery running in citrus packing houses and canning plants--invented, installed, maintained epuipment. From him I got confidence in my ability to solve problems and manipulate things in the physical world. Mom is devoted to family and inclined towards religion. (Both her father and grandfather were Primitive Baptist preachers.) From her I got love of natural beauty and an interest in what lies beyond the surface of things. I got much more than this from both of them, but I only have 10 megs on my server's hard drive. 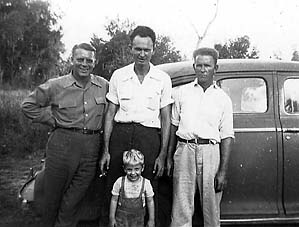 When I was about three years old I developed wanderlust, and with my baby brother keeping Mom busy, I could sneak away before she missed me. I could not understand why this was a problem, but they convinced me I should honor their feelings on the subject--the events following my solo trip to Joy's first grade classroom were very persuasive. 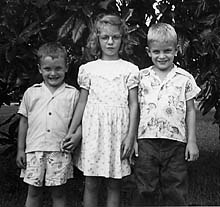 When I found out at age eleven that I was old enough to get a paper route I was thrilled. Not only would I be making money, I would be away from supervision every afternoon after school, delivering the evening news. I was supposed to collect the money every Saturday, but when customers weren't home I had to try again during the week. The end result was that I picked up a little cash every day, which I promptly spent on sweets at the first store I came to. I was always short when it came time to pay the bill, and Dad made up the difference. I lied to him that people were putting me off, not paying me, and he never questioned my honesty. Years later when I confessed he said with a smile, "You owe me."

That job lasted 5 or 6 months, till I decided to move on to better things: shining shoes at the barber shop. The shop was two doors down from the drug store, where the barber often had to come looking for me when a customer wanted a shine. I was either spending my money at the soda fountain, or sitting on the floor reading comic books and magazines. 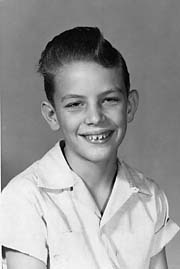 At the barber shop I had unlimited access to hair oils

The following summer Dad bought a power mower so I could pick up some real cash, and then the summer after my sophomore year I got my first regular job--working on typewriters at a shop that serviced all the machines from the surrounding high schools. The next summer I worked in a soil analysis lab for a fertilizer company, and the summer after my senior year I worked in a warehouse at a canning plant. Between summer jobs I did farm work and raked leaves after school.

For a kid from a small town in the South, I was exposed to a fair variety of experience in my formative years.

Through no fault of my own I turned out to be one of the smart kids in school, and everyone always said I should go to college, but senior year was rolling by and I hadn't yet gotten around to filling out any applications. A teacher and student counselor named Winifred Evans, bless her, took me under her wing and prodded me till I got the paperwork done--even digging up a scholarship application which I applied for and got. Without her where would I be today? 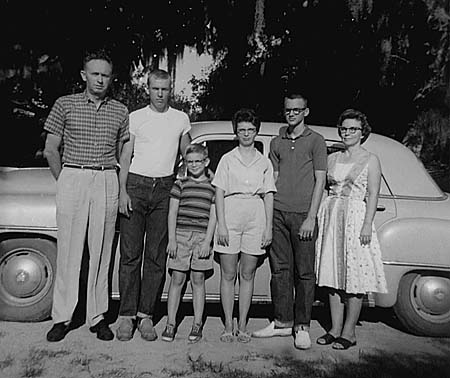 Seeing Norm off to college

My scholarship consisted of free cooperative housing--we paid $29 a month for food and utilities, and everyone cooked and cleaned on schedule. We were an interesting assortment of fellows, all poor, some from pretty disturbed backgrounds. I brooded on the meaning of life, learned to smoke cigarettes, got kicked out of the honors program, and in the first term of my sophomore year I was introduced to alcohol. My best buddy and I drank up our money for the year in three and a half months, and I went home broke with a cumulative grade-point of 2.6.

There weren't many jobs in Fort Meade in January. I had worked in the phosphate mines the summer before, but they weren't hiring again till June. I went south to the big city, Miami, and stayed with a family friend till I got a job as a barboy at the Indian Creek Country Club.

What a place! Built on a man-made island by the Firestones in the twenties, water-front mansions on the perimeter surrounded a golf couse and huge Spanish-style clubhouse. It was only open during the winter season, and most of the staff worked up north in the summers, except for the Cuban dishwashing crew. The chefs were all French and we ate well. The sou-chef spoke swahili with the meat deliveryman and carved ice sculptures for the caviar. The chief steward was Swiss and spoke with a German accent except when he was imitating Southerners--he was studying Arabic for fun.

I only worked as a barboy a couple of nights a week and for special parties, and during the day I helped the waitress who worked the snack bar on the golf course. One of the golphing members, Fred Felhaber, found out I was working my way though school and got a friend of his, George Abbott, to give me a schoarship, good for $250 a term the rest of the time I was an undergraduate--big bucks in 1964. If it hadn't been for those guys...

When the Club closed for the season in May, I went back the the mines, where I spent the summer feeding ore into a phosphorous furnace, sweating and breathing noxious fumes.

Some friends had decided to quit the scholarship house--too many restrictions--so four of us rented an apartment off-campus. I had learned discretion in my drinking, and with a part time job as a projectionist in the audio visual department I managed to make ends meet.

That spring I took my first sociology course and was hooked. Here was the explanation for why people were who they were: Catholics were different from Protestants, rich people were different from poor people, the educated different from the unschooled. I had found a mission: I would explain to people that the differences between them were all circumstantial; there were no grounds for feeling superior or inferior--strife and anomie, fear and insecurity--all would be ended if people could just be convinced that they are all basically the same.

First of course, I would have to unify the social sciences--integrate sociology and psychology so that all angles were covered--then I could make my case. I was dedicated; my grades improved dramatically. Thanks to a kind-hearted French teacher I even made a four-point average one term. I managed to maintain my enthusiasm through my first year of graduate school, but at the start of my second year I crashed. I was teaching a course in basic sociology, and it seemed I would have to re-write the textbook as I went. Then for our first assignment in a social psychology we were given the piddling task of looking through a few texts and coming up with a definition of the subject. It was the last straw. Sociology was in disarray. There was no agreement on general theory; everybody had their own idea of what it was about, and I had bitten off more than I could chew. I quit school and got a job in a cafeteria just off campus.

I had married a fellow graduate student the previous December. In fact, she had performed the same function in college as Ms Evans had in high school. She had prodded me into filling out the applications that got me into graduate school with an assistantship. We were going to be college professors together, but the fantasy fell apart with my change in plans, and our divorce became final two weeks before our first anniversary.

With my student deferment gone the draft board was after me. The Air Force seemed like a better deal than the Army, so by January I was off to Texas to begin a four-year stint with Uncle Sam. My degree made me eligible for officer training, and the sargeant at the enlistment office had steered me toward an assignment as a Minuteman Missile Launch Officer in Great Falls, Montana--far from Vietnam. Who knows where I would have been...